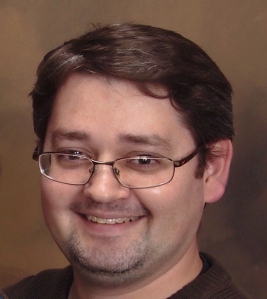 Chad Lee Robinson grew up along the banks of the Missouri River in central South Dakota. He continues to live there with his wife Kimberly and his son Nathan, and works as the manager of his father’s store, Korner Grocery.

It was in 2002, while attending South Dakota State University, that David Allan Evans, the poet laureate of South Dakota at that time, introduced him to haiku by sharing a translation of Basho’s haiku about a crow on a bare branch. The attraction was immediate, and Robinson has since devoted all of his creative energy to haiku, senryu and tanka. More than 500 of his poems have been published. Much of his work is about small towns and the Great Plains.

In addition to his prize-winning chapbooks, Robinson’s haiku and senryu have received a number of awards, including The Heron’s Nest Readers’ Choice Awards Poem and Poet of the Year (both in 2008), a Modern Haiku Award for senryu (2006), two Touchstone Awards for Individual Haiku from The Haiku Foundation (2011 and 2018), as well as a Pushcart Prize nomination from Modern Haiku for his haiku sequence “Say Uncle” (2011). His work has been anthologized in many places such as A New Resonance: Emerging Voices in English-Language Haiku Volume 4 (Red Moon Press, 2005), Baseball Haiku (W.W. Norton, 2007), Montage: The Book (The Haiku Foundation, 2010), Haiku 21 (Modern Haiku Press, 2011), Haiku in English: The First Hundred Years (W.W. Norton, 2013), and fifteen editions of the Red Moon Anthology series from Red Moon Press.

Along with his achievements as a poet, Robinson has served the Haiku Society of America as Plains & Mountains regional coordinator (2006-2011 and again in 2014). He was also a panelist for The Haiku Foundation’s Touchstone Distinguished Book Awards (for award years 2013, 2014 and 2015). Robinson also edited Gone Fishing, a Per Diem: Daily Haiku feature that appeared on The Haiku Foundation’s website in September 2014.

4 thoughts on “About the Author”